Limits and Inspirations of Mapping A Queer New York

The path to lesbian, gay, bisexual, transgender, and queer (LGBTQ) liberation has been narrated through a claim to long-term territory in the form of urban neighborhoods and bars. Lesbians and queers fail to attain or retain these spaces over generations—as is often the case due to lesser political and economic power—so what then is the lesbian-queer production of urban space in their own words? Drawing on interviews, archival research, and data visualizations with and about lesbians and queers in New York City from 1983 to 2009, my participants queered the fixed, neighborhood models of LGBTQ space inproducing what I call constellations. Like stars in the sky, contemporary urban lesbians and queers often create and rely on fragmented, fleeting experiences in lesbian-queer places, evoking patterns based on generational, racialized, and classed identities. Lesbians and queers are connected by overlapping, embodied paths and stories that bind them over generations and across many identities, like drawing lines between the stars that come and go in the sky. This queer feminist contribution to critical urban theory extends current models of queering and producing urban space. 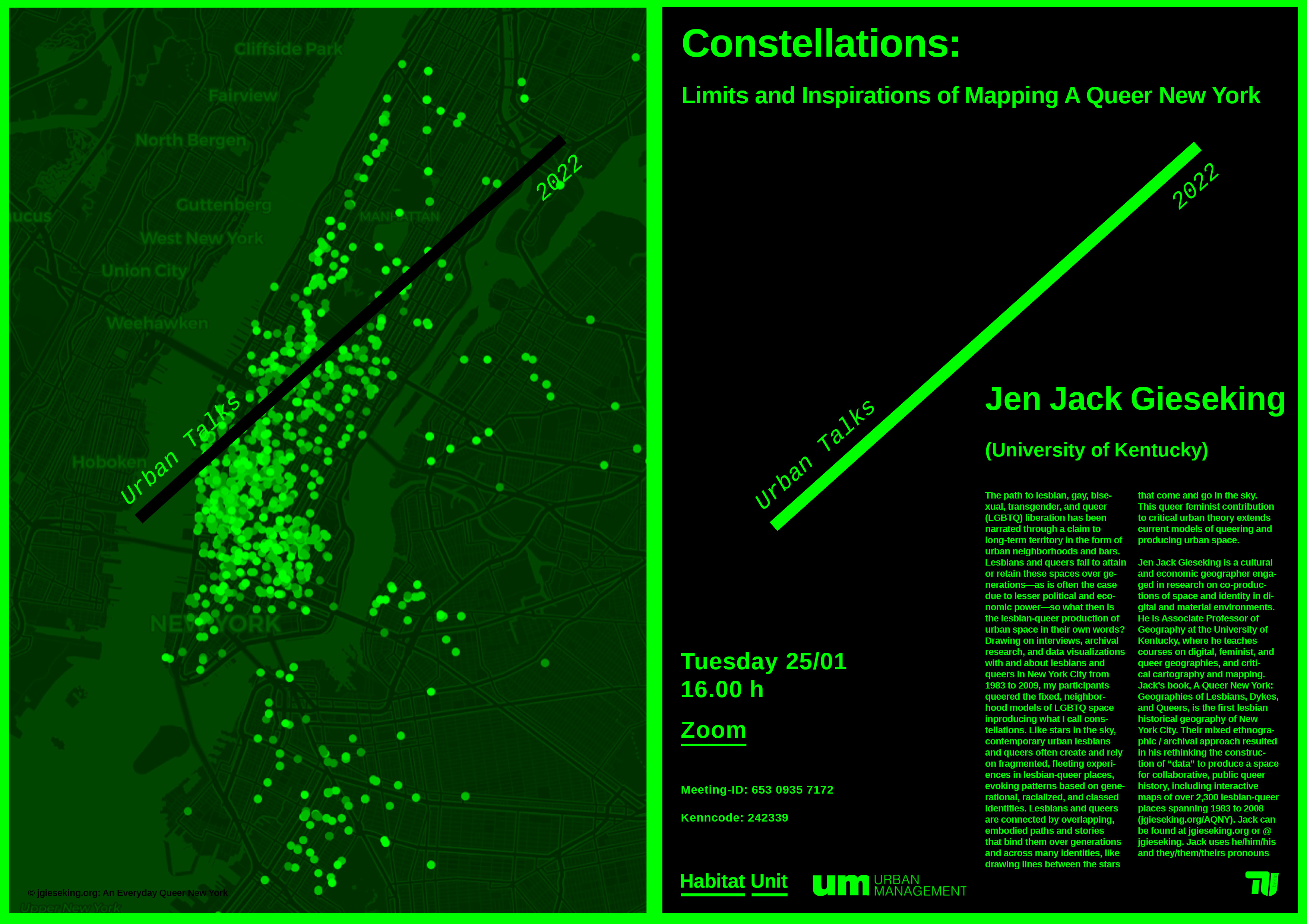 Bio
Jen Jack Gieseking is a cultural and economic geographer engaged in research on co-productions of space and identity in digital and material environments. He is Associate Professor of Geography at the University of Kentucky, where he teaches courses on digital, feminist, and queer geographies, and critical cartography and mapping. Jack’s book, A Queer New York: Geographies of Lesbians, Dykes, and Queers, is the first lesbian historical geography of New York City. Their mixed ethnographic / archival approach resulted in his rethinking the construction of “data” to produce a space for collaborative, public queer history, including interactive maps of over 2,300 lesbian-queer places spanning 1983 to 2008 (jgieseking.org/AQNY). Jack can be found at jgieseking.org or @jgieseking. Jack uses he/him/his and they/them/theirs pronouns.

The Urban Talk is part of the seminar "Stadt der queeren Räume".