Architects and planners are increasingly confronted with new challenges: Fossil energy resources as well as non-renewable materials are on the decline, the effects of climate change and pollution threaten our living conditions and environment and lead to migratory movements and conflicts worldwide. Global urbanization and construction processes are among the largest greenhouse gas producers. At the same time, our increasingly urbanized societies offer a chance for a radical rethinking of these processes. Only if we succeed in making the global urban transformation sustainable and socially inclusive, we can secure our planetary survival.

Governing Transformation
Securing the Great Transformation towards sustainability requires a multitude of adaptions in infrastructures, production processes, lifestyles and the way our cities are governed and managed. A big issue is overcoming short-term thinking when designing new kinds of interaction and processes between governments and their administrative units, society, science, and the economy. How can more inclusive and right-based approaches to urban policy, as well as development-oriented and actor-driven planning be designed?
A better and more critical understanding of the politics of these governance challenges in a global context is required in order to enable the great urban transformation towards more sustainability. 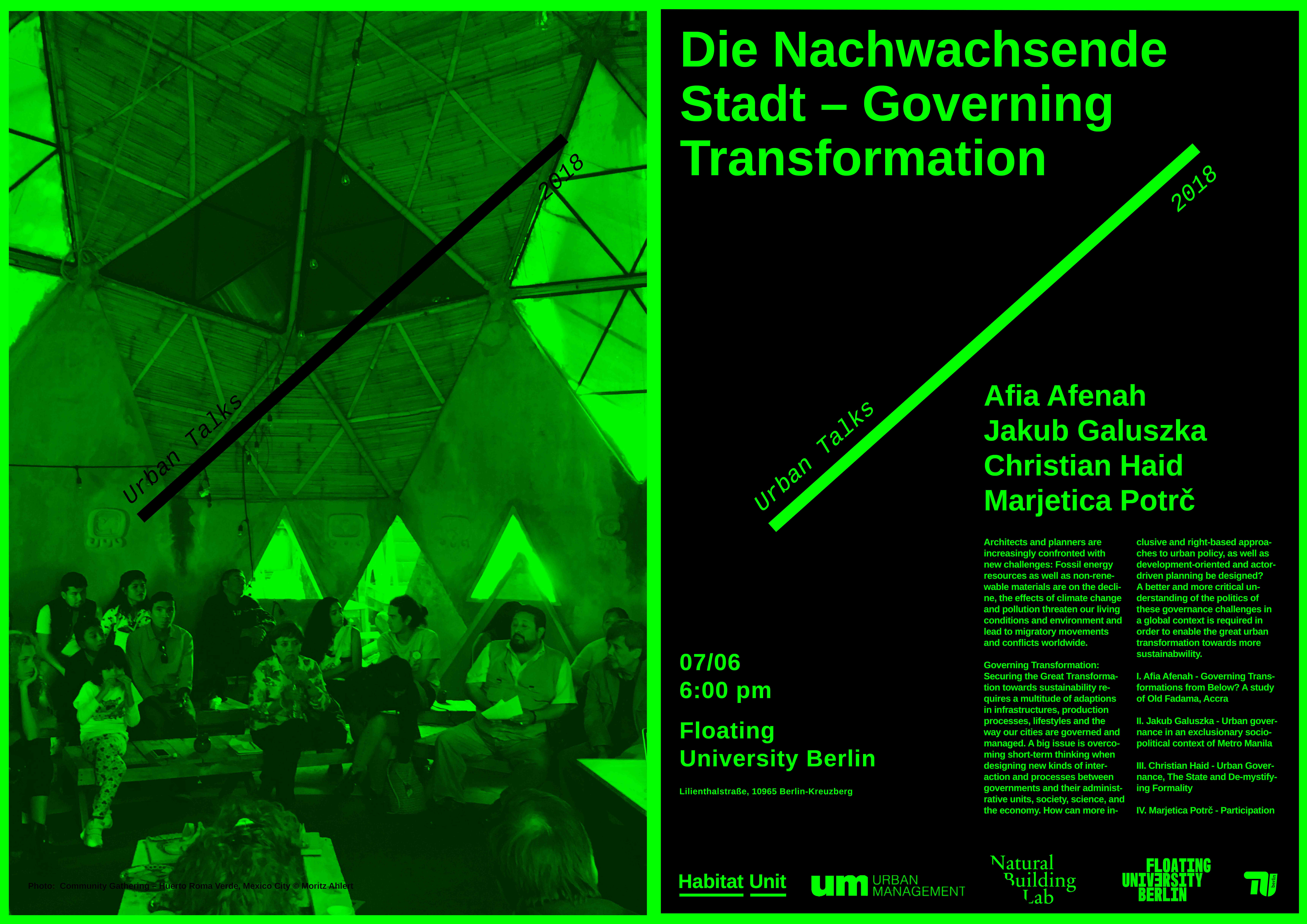 Afia Afenah (Center for Metropolitan Studies – Berlin)
Governing Transformations from Below? A study of Old Fadama, Accra
Although frequently portrayed as lawless and ungoverned, multiple and complex everyday governance practices unfold in informal neighborhoods across African cities. Using the case study of Old Fadama (Accra), I explore how these practices can inform the endeavor of 'governing transformations'.
Afia Afenah, is an urban anthropologist interested in the role of non-state actors in urban governance. Before embarking on her PhD she worked for an international urban planning firm, where she provided research and project management on a diverse range of urban planning and housing projects in cities in the global South.
Afia is currently a part-time lecturer in the Urban Management Master's Programme at the TU Berlin and an Associate Doctoral Student at the Center for Metropolitan Studies, Berlin. Her PhD project explores processes of everyday governance by state and non-state actors in Old Fadama, Accra's largest informal settlement.

Jakub Galuszka (Habitat Unit – TU Berlin)
Urban governance in an exclusionary socio-political context of Metro Manila
The talk reflects on successes and failures of the urban poor sector in encroaching into the sphere of urban governance in an exclusionary socio-political context of Metro Manila. This is discussed on an example of the sector's efforts to integrate in-city resettlement and People's Plans as a standard developmental measure and official policy response in the metropolis.
Jakub Galuszka is an urban planner and sociologist currently working as a coordinator of the Wits-TUB Urban Lab Project at the Habitat Unit, Technical University of Berlin. Before joining the Habitat Unit, he worked and conducted research in Poland, the Philippines, Georgia and South Africa. This involved his cooperation with the EC1 Lodz – City of Culture - an institution responsible for reconstruction of city center in Lodz, Poland and the Violence Prevention through Urban Upgrading programme focusing on upgrading of low-income and informal areas in Cape Town, South Africa.

Christian Haid (Habitat Unit – TU Berlin)
Urban Governance, The State and De-mystifying Formality
Adherence to regulations, determinist masterplanning, abidance to the law: In his talk, Christian Haid debunks the myth of formality in governing our cities. Informality is deeply embedded in urban governance not only in the Global South but (increasingly) also in the Western urban world. Examples from Berlin and other cities in Europe will elucidate how practices of flexibility, negotiability, and ambiguity are inherent to the everyday workings of the state and the transformation of the urban. Christian Haid works as a senior researcher at the Habitat Unit since October 2017. Christian is an architect and urban sociologist and his research focuses on critical urban studies, urban informality, and postcolonial theories. Christian holds a master in Architecture from the Academy of Fine Arts Vienna and a master in Urban Studies from University College London (UCL). In July 2017 he completed his doctoral dissertation "City Life in Limbo – Globalizing Urban Informality and (In)Stabilites in Informal Practice" in urban sociology at Humboldt University Berlin.

Marjetica Potrc (Social Design – HFBK Hamburg)
Participation
Marjetica Potrč is an artist and architect, working worldwide in different geopolitical contexts, often in economically disadvantaged neighborhoods. In her interdisciplinary practice, including on-site projects, research, architectural case studies, she encourages local community participation and promotes local knowledge. In this input lecture she will focus on participation and design as a tool of cultural change toward new social agreements on matters such as public space, citizenship or collective decision-making.
Since 2011, Marjetica Potrč teaches the class "Design for the Living World", a class on participatory practice at the University of Fine Arts/ HFBK in Hamburg. She and her students have carried out participatory design projects in various parts of Europe as well as in the United States, Mexico and South Africa. Her class is also part of the Floating University Berlin, working on water infrastructures, biodiversity and mapping of this urban void.