Even before the COVID-19 crisis hammered home the vast economic and social differences affecting urban populations around the world, it was clear that inequality would be one of the biggest challenges facing global cities in the 21st century. There are few facets of urban life that are not affected by one’s access to public services and resources.

The interfaces between research and policy making needed for equitable economic growth (EEG) exist as complex webs of relations connecting stakeholders and actors who translate their knowledge into specific policies and practices at all scales. We ask the questions:

What do these interfaces actually look like, and what roles do researchers have in them?

Are these interactions further shaped by the regional context in which they take place?

To what extent do external dynamics and/or interest-driven actions influence the mechanisms connecting research and policy making for EEG? 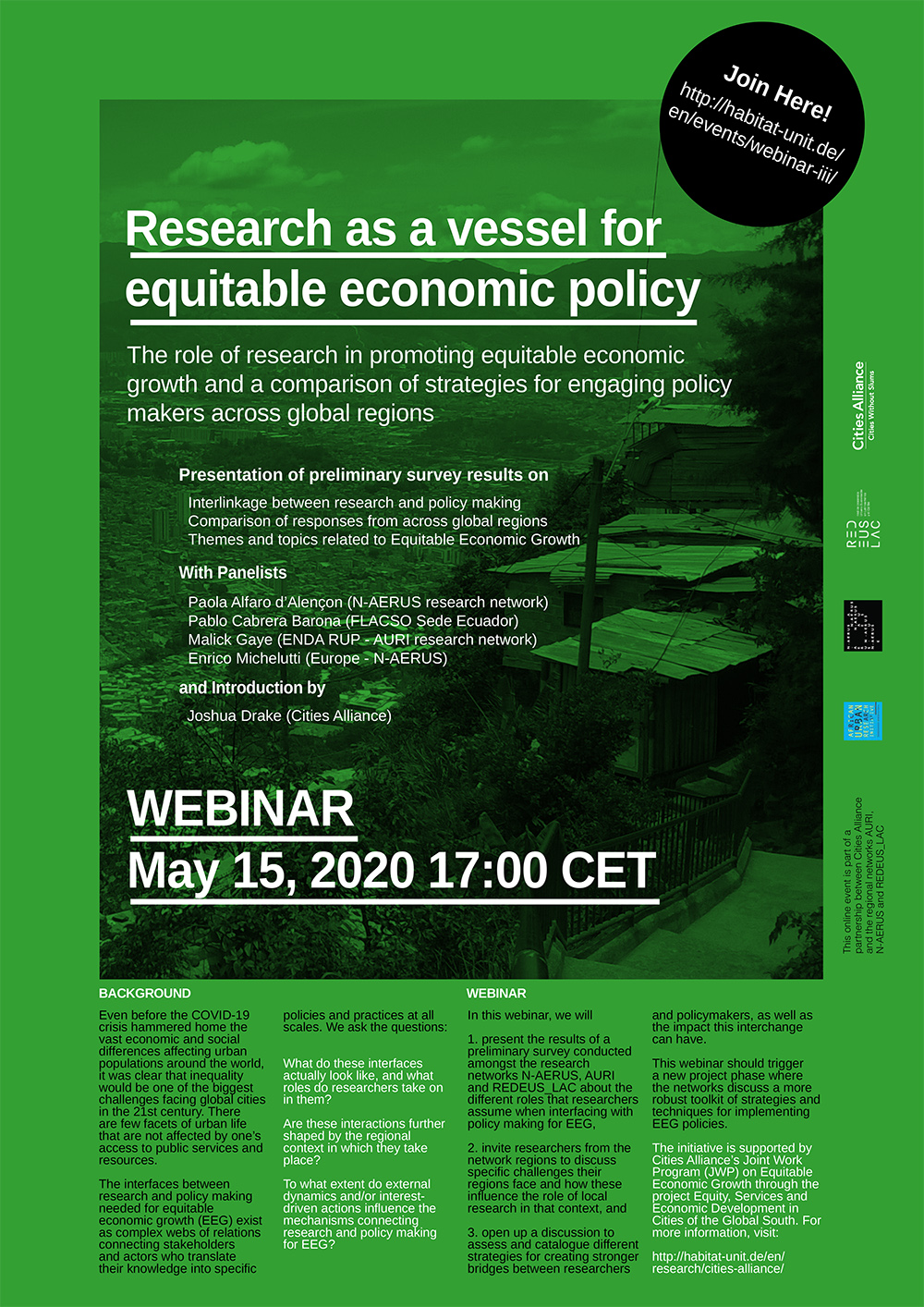 In this webinar, we will

1. present the results of a preliminary survey conducted amongst the research networks N-AERUS, AURI and REDEUS_LAC about the different roles that researchers assume when interfacing with policy making for EEG,

2. invite researchers from the network regions to discuss specific challenges their regions face and how these influence the role of local research in that context, and

3. open up a discussion to assess and catalogue different strategies for creating stronger bridges between researchers and policymakers, as well as the impact this interchange can have.

This webinar should trigger a new project phase where the networks discuss a more robust toolkit of strategies and techniques for implementing EEG policies.

The initiative is supported by Cities Alliance’s Joint Work Program (JWP) on Equitable Economic Growth through the project Equity, Services and Economic Development in Cities of the Global South. For more information, visit:

The webinar and Q&A will be held in English.

Our WP2 Team will present the findings of the critical survey with commentary from panelists from researchers in Latin America and Africa. We welcome:

Trained as architect and urban planner, Enrico Michelutti focuses his research on urban policies and governance. Through experiences at the Technical University of Catalonia (Barcelona, Spain), Université Libre de Bruxelles (Belgium) and University of Udine (Italy), he is developing a research path on knowledge production and co-production on cities and landscapes in European and global contexts. In the period 2014-2018, he has been co-coordinator of N-AERUS (Network-Association of European Researchers on Urbanization in the South)

Pablo Cabrera-Barona is full Professor at the Latin American Social Sciences Institute (FLACSO), in Quito, Ecuador. He obtained his PhD (Dr. rer. nat.) at the University of Salzburg, Austria. He authors and co-authors a significant number of high impact papers in the fields of geographic information science, urban studies, public health, and socioeconomic geographies. He has also presented his research in different prestigious conferences in Latin America, Europe and Asia. For more information about Pablo, please visit his website: https://www.pablocabrerabarona.com/

Malick Gaye is an architect, urban planner and researcher at Enda Tiers Monde - environnement, développement et action since July 1982. He is currently Executive Director of the Relais pour le développement Urbain Participé of the ENDA TM Global Network, which has obtained Special Consultative Status with the United Nations ECOSOC, is also a member of its Bureau of the Political Initiative Department and has become a Strategic Partner of the European Union for the past 3 years. He has represented the ENDA TM Network after Habitat International Coalition (HIC) since 1987 and at the Limuru Conference in Kenya, as well as in UN-HABITAT. The last International Conference where he was the official Representative was HABITAT III after HABITAT II, to which he has contributed his 2nd book "Entrepreneurial Cities" in 1996 after his 1st book entitled "Birth of a City in Senegal". It was selected and presented as one of the first 25 UN-Habitat Dubai Best Practices at the Dubai International Conference in 1995, preliminary to Habitat II. He has served for the past 10 years as president of the neighbourhood development association of the local collective where he lives and where he welcomed HIC SG Enrique Ortiz and Wandia Seaforth of Mazingira Institute of Kenya in 1991. He coordinated the HIC Focal Point for French-speaking Africa for nearly a quarter of a century, as well as the HIC Reference Centre for the relationship between Housing and the Environment. On behalf of Enda Rup, it is currently implementing the project "Strengthening the role and place of civil societies in the South in the implementation of a transformative 2030 agenda" co-financed by the EU and Luxembourg Aid & Development to the ENDA Network on the 17 SDGs, not to mention the contribution of the State of Senegal, which has long allocated the premises of the headquarters as a public utility. The 4000 women of the Senegalese Federation of Inhabitants (FSH) and the NGO urbaSen, member of urbaMonde and SDI are, among others, involved in this project.

Josefa Zavala started working as research assistant at the Habitat Unit in February 2019 in ‘DFG_KoPro’ research project, especially attending to the Chilean Delphi case. During the same year, she joined the teams of Cities Alliance “Fostering Equitable Economic Growth: Joint Work Program”. Josefa is currently enrolled in the Master of Arts of Research Training Program in Social Sciences of the Humboldt Universität zu Berlin. Josefa completed her bachelor and masters studies in Sociology at the Pontifical Catholic University of Chile (PUC) and between 2010-2017 she worked as data analyst and head of qualitative studies in the Direction of Social Studies (DESUC) of the Institute of Sociology of the same University. In the framework of the current DFG_KoPro Int. Project, Josefa will contribute with her current Master’s Thesis (HU-Berlin) under the guidance of the principal researcher (Dr. Ing Paola Alfaro-d’Alençon) to address the questions related to how critically evaluate the capacity of different co-produced forms to reform existing power dynamics in urban development.

This webinar is one of a five-part series to evaluate, contextualize and operationalize existing research by Cities Alliance on equitable economic growth in cities of the Global South. Three research networks, working in Europe (N-AERUS), Africa (AURI) and LAC (REDEUS_LAC), collaborate to identify common problems cities face in pursuing social equity and economic growth, to share tested strategies for integrating policy making and research, and to disseminate these strategies to broader urban contexts. By targeting a global audience, we can share experience both within and beyond the regional focus of each webinar. For more information on the project, please go to: https://www.citiesalliance.org/newsroom/news/cities-alliance-news/cities-alliance-announces-grant-tu-berlin-equity-services-and

WP2: presentation of preliminary results from critical survey based on three main questions

FLACSO & AURI: reflection on results from critical survey based on own research experience

Participants: questions and comments from researchers from global networks and other participants.