Researching Cement in a Global Perspective 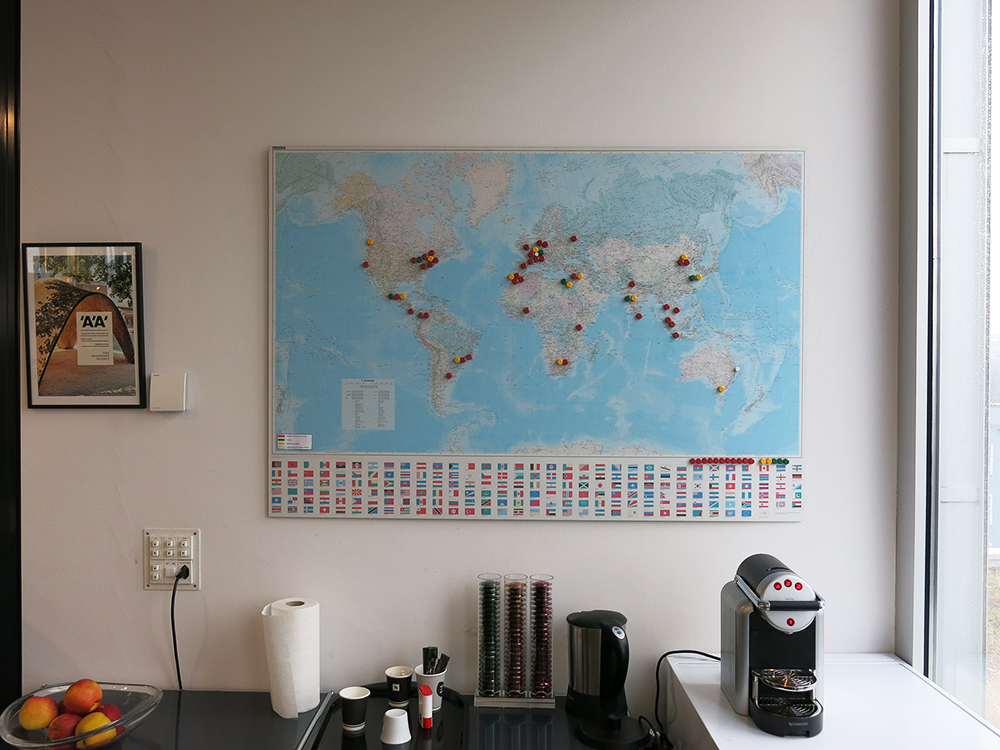 As cement production has become recognized as climate destroyer, and concrete thus a critical building material of the Anthropocene, a re-conception of architecture history seems necessary, in terms of a critique of modern industrial processes, and imaginaries how we might relate to energy and material. In my talk, I will speak about my ongoing research into material histories, regarding cement and concrete, informed by forensic and the geological turn. I redraw the material and corporate geographies of the global market leader LafargeHolcim from its origins in 1912 to its expansion as a global financial holding company, ensuring the modern trope of ubiquity, to its current support of projects like the NEST building (Gramazio Kohler 2016), communicating not just sustainable building technology but the unavoidability of cement and concrete as building materials. The talk will explore the parallels between a global expansion of business, extending value chains, after the merger of Holcim and Lafarge in 2015, and the global activities of the LafargeHolcim Foundation, such as an architectural competition and a conference series. 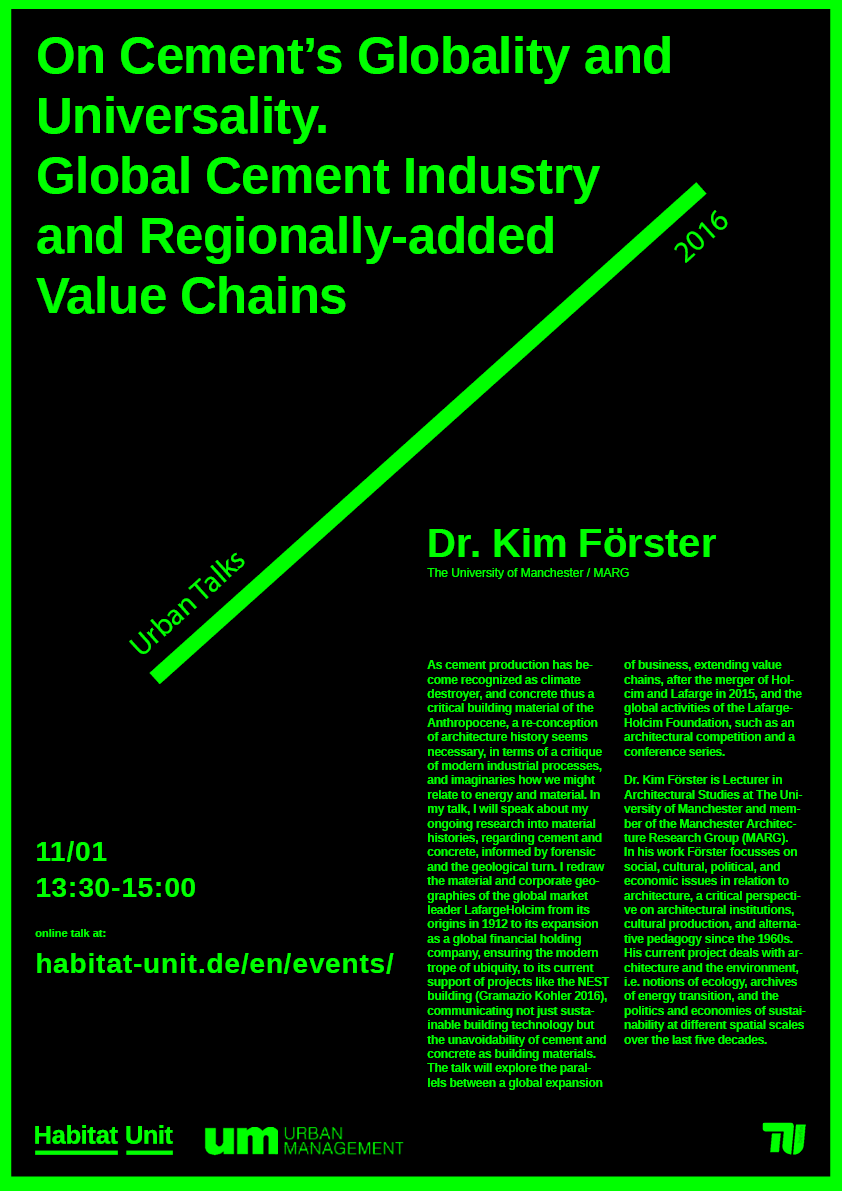 Dr. Kim Förster is Lecturer in Architectural Studies at The University of Manchester and member of the Manchester Architecture Research Group (MARG). In his work Förster focusses on social, cultural, political, and economic issues in relation to architecture, a critical perspective on architectural institutions, cultural production, and alternative pedagogy since the 1960s. His current project deals with architecture and the environment, i.e. notions of ecology, archives of energy transition, and the politics and economies of sustainability at different spatial scales over the last five decades.

Global construction companies impact our futures. Beyond the edifices and infrastructures they construct, they also fundamentally influence governmental development aid policies, or dislocate people to build a new dam, for example. Yet the role of these major global players and their persistent presence in different world regions has barely been reflected upon. In my talk, I will give insights into our ongoing research project investigating how major German construction companies conquered markets and spaces, thereby cementing their presence in different regions of the "Global South". We argue that it is impossible to fully understand the complexity of the built environment in these regions without acknowledging and analysing the role of construction companies such as HOCHTIEF AG or Bilfinger Berger as actors, stakeholders, transnational legal entities and major driving forces in the processes of globalised construction business. As a case study, I will discuss plans for a cement plant in the colonial context of German East Africa in the 1910s, situating them in the context of global commodity chains. 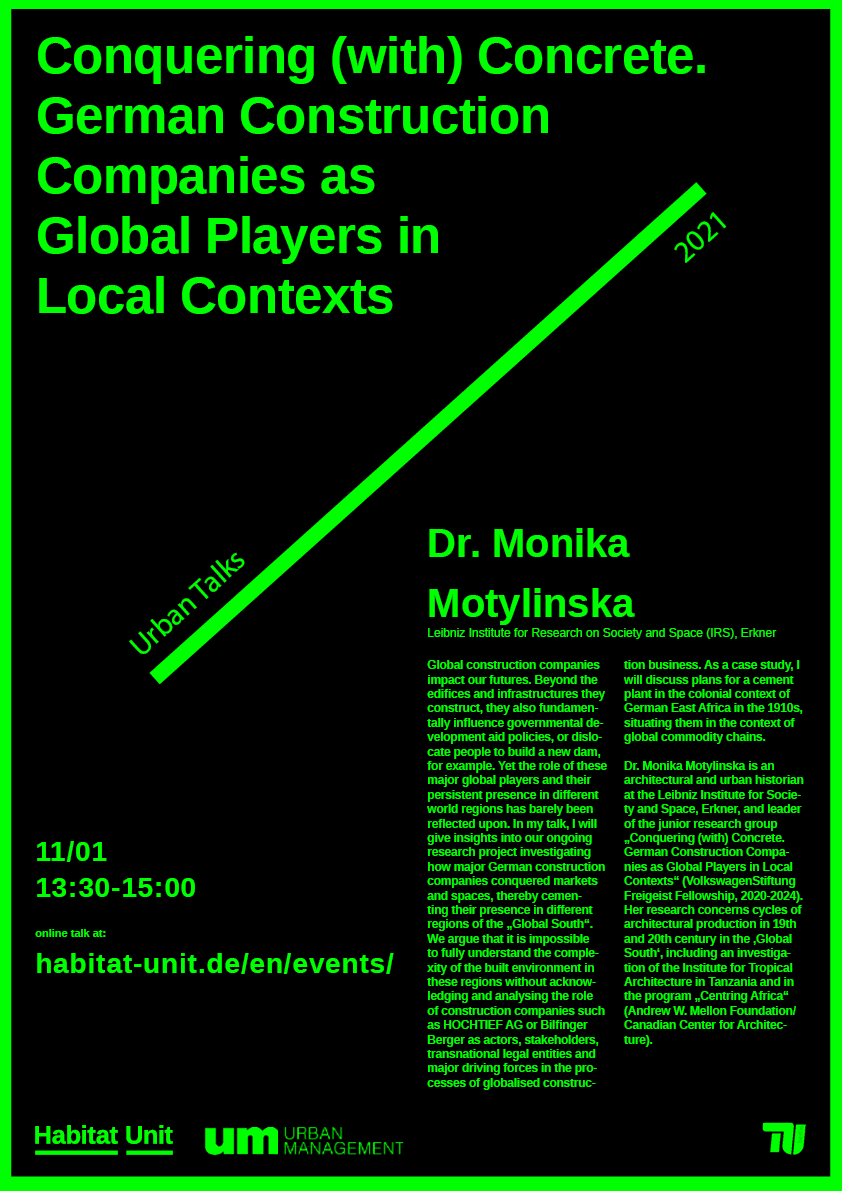 Dr. Monika Motylinska is an architectural and urban historian at the Leibniz Institute for Society and Space, Erkner, and leader of the junior research group „Conquering (with) Concrete. German Construction Companies as Global Players in Local Contexts“ (VolkswagenStiftung Freigeist Fellowship, 2020-2024). Her research concerns cycles of architectural production in 19th and 20th century in the ‚Global South‘, including an investigation of the Institute for Tropical Architecture in Tanzania and in the program "Centring Africa" (Andrew W. Mellon Foundation/Canadian Center for Architecture).