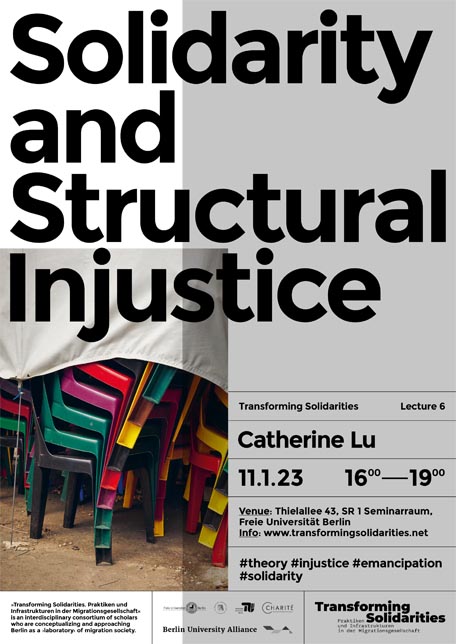 Catherine Lu is Professor of Political Science at McGill University, and Director of the Yan P. Lin Centre for the Study of Freedom and Global Orders in the Ancient and Modern Worlds, as well as Research Coordinator of the Research Group on Global Justice of the Lin Centre. Her research interests intersect political theory and international relations, focusing on critical, historical, and normative studies of global justice, structural injustice, and colonial international order; humanitarianism and intervention in world politics; alienation and reconciliation;  and cosmopolitanism and the world state. In addition to writing articles on these themes, she is the author of two books: Justice and Reconciliation in World Politics(Cambridge University Press, 2017), which won four book awards, and Just and Unjust Interventions in World Politics: Public and Private (Palgrave Macmillan, 2006).
Transforming Solidarities. Praktiken und Infrastrukturen in der Migrationsgesellschaft« is an interdisciplinary consortium of scholars who are conceptualizing and approaching Berlin as a ›laboratory‹ of migration society – that is, a society that is fundamentally and irrevocably transformed by migration. Through case studies that examine the interconnected areas of labor, housing and health we explore how solidarity is negotiated and investigate practices and infrastructures that condition or limit solidarity.
More info: www.transformingsolidarities.net
Download Poster here.
Foto: (c) Monika Keiler